My friend Mei Tung did a performance in Postdamer place, in Berlin., as she is still studying in Europe.

"Maybe it is true. If you just go by yourself, with nothing, people will just appeared to help. I decide to go to Berlin Wall to do a 64performance really in the last moment, in 1st June, just go alone. Event did not think of finding friend for documentary(…)I met Hong Kong students when I was doing performance, and now, I know I am not alone, as, I am not the only one who would like to go to Berlin to visit the wall in June(…)"

(I will update this post as soon as some film/picture of this performance are released).

despite the rain, 150000 people gathered in Victoria park(article in Chinese) in Hong Kong for the celebration.

(…)That's why every year I'll say something about it, even if it’s all been said before. And let's not forget, the CCP can be a benevolent force that can do a lot of good. But when its survival is threatened, something very different can emerge(…) 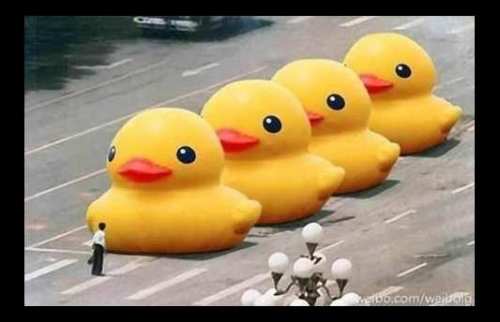 Before getting censored, some creative pictures already went viral (you've heard about the giant duck(BBC news article) from Dutch artist Florentijn Hofman, travelling over the world?